The multipurpose Hall for the CBC Inclusive School and Sign Language Center (ISSLC) in Mbingo that has been in projection few years back will soon see the light of day in the months ahead. This project is being realized, thanks to funding from Wild Gansen Foundation in collaboration with the CBC Health Services.

During a planning meeting on March 22, 2019 at the Baptist Center Nkwen in Bamenda, the Coordinator of Services for Persons with Disability (SPD), Mr. Awa Jacques Chirac took the stakeholders on a retrospect to 2017 when reflections began on the change of orientation for the school to make it donor friendly. These reflections resulted to the transformation of the school from Integrated School for the Deaf to CBC Inclusive School and Sign Language Center (ISSLC). 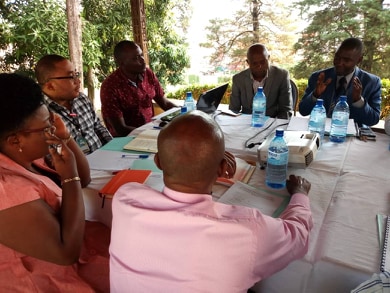 Mr. Awa explained that “With this shift of orientation, the school will serve as a training center, thus, the need to acquire an infrastructure like a hall to be able to accommodate the services to be offered”. He said it was against this backdrop that a project was put up to Wild Gansen Foundation some years back explaining the need for the hall, which later materialized with the approval of funding for the construction of the hall.

During the meeting that brought together key stakeholders who are experts in the field and who will directly be involved in the implementation of the project, the implementation strategic plan of the project was reviewed with inputs and timeline from the stakeholders. Looking at the design of the hall which is described as an inclusive hall, the SPD Coordinator emphasized that quality must be maintained at all levels of construction. To ensure quality, stakeholders noted that inspection by the supervising team be carried out on regular basis.

According to the Administrator of Mbingo Baptist Hospital, Mr. Nji Richard, the project is a dream comes true given that it will be useful to the entire CBC Health Services and beyond. For his part, the Head Teacher of the school, Mr. Che Manaseh noted that the hall will help to foster inclusion in the school as learners with and without impairments will freely have space to carry out their inclusive activities together. 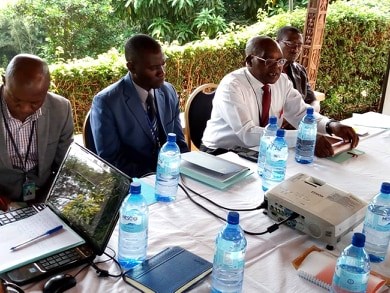 The CBC Health Services’ Administrator of the Technical Services Department (TSD), Mr. Ngam Joseph likened the CBC Health Services to a hunting dog that never gets tired of hunting. He added his voice to the previous speakers to commend the funders of the project, assuring the stakeholders that with his leadership at the TSD, work will commence immediately and effectively with good results recorded at the end.

Upon completion of the hall, it will be used for conferences, retreat, meetings, workshops, school activities just to name a few. The project is expected to be complemented and handed in 2019.

It should be noted that Truus Treep in the Netherlands whose passion for children with hearing impairments has been the brain behind the mobilization of funds for the project.